DALIKA was bred in Germany by Gestut Ammerland, who sold her in the spring of her three-year-old career.

The US result maintains the great day for Ammerland, who topped Day 1 of the Arqana August Sale with its Shamardal colt out of Lady Frankel, who sold for €1,600,000 (Lot 21).

Her dam Drawn To Run ( Hurricane Run) has a Waldgeist yearling colt entered in the BBAG September Sale to be consigned by Ammerland.

The Deutsches Derby (G1), Prix Ganay (G1) and Grosser Dallmayr-Preis – Bayerisches Zuchtrennen (G1) winner started his career in Germany at Gestut Fahrhof at €6,500 in 2014 and moved to France in 2018. 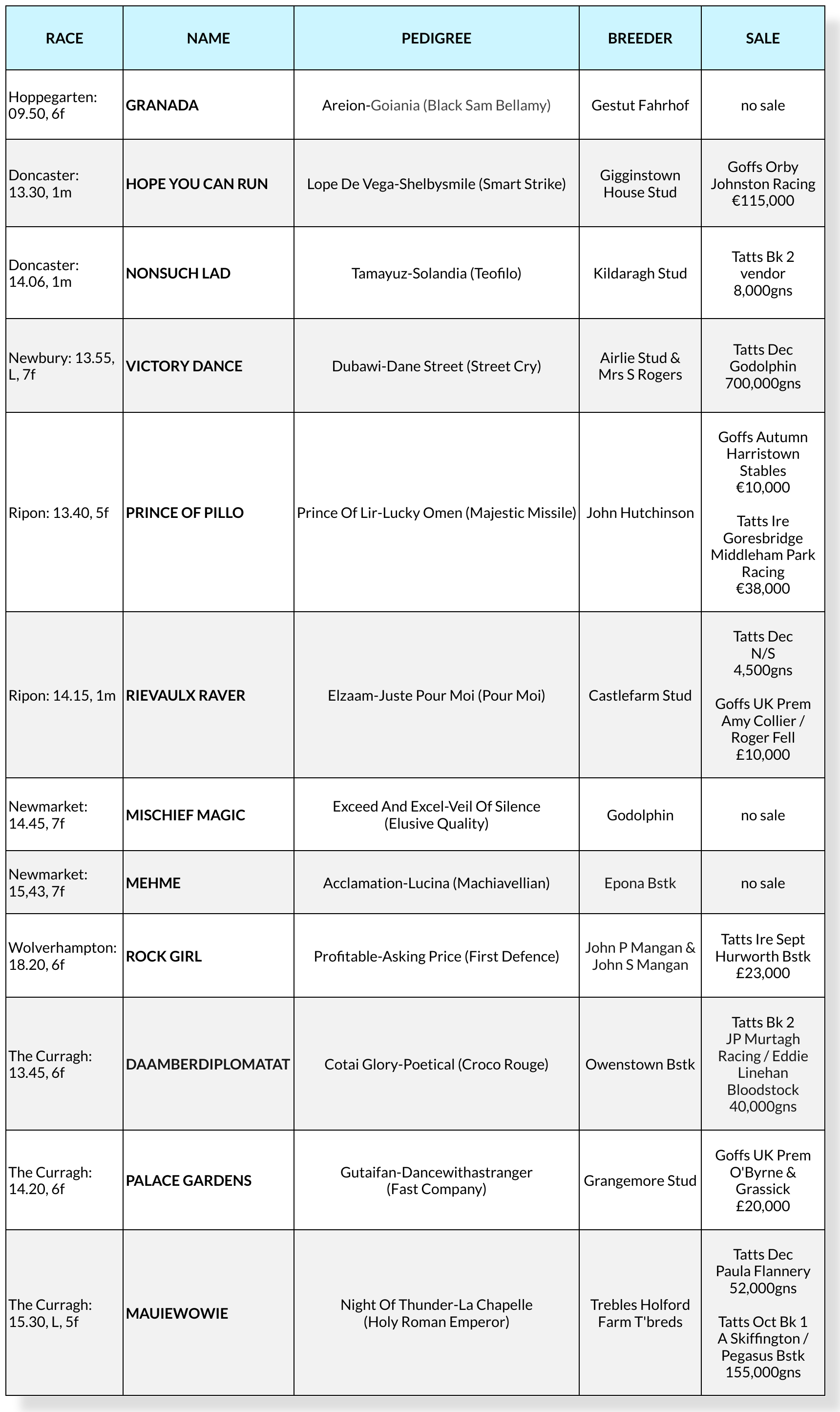 HARAS DU MONT DIT MONT gets the result of the sale –  the farm sells its first foal out of the broodmare Shamtee (Shamardal) for €675,000 (Lot 133), purchased by Chauvigny Global Equine.

“It is all about doing things together right from doing the matings – it is a great result for the farm and we are gong to celebrate tonight or tomorrow night!”

The colt by Sea The Stars has been produced on the farm and under the guidance of Jennifer Sassier and team.

Sassier was previously at Arrowfield in Australia and moved to Mont dit Mont 12 months ago, which she says is one of the few farms in Normandy from where you can see the sea.

In our voice recording she explains some of the background to the colt and farm, which is owned by the Dubai-based British businessman Neil Helliwell.

Helliwell also runs Prime Equestrian, who purchased the dam Shamtee for €240,000 at the Arqana October Sale in 2016.

Kieran Lalor, general manager of Al Shira’aa Racing, said: “Rumi is running in a Group 1 next week, we really feel she is a Group 1 filly – hopefully this will look a cheap purchase by then!

“It is a very very good family and  this filly is by Galileo – he is the best stallion I have seen in my lifetime. He is also a very very good broodmare sire which is also important for us. I thought she was very elegant, she is a very good walker, good size. We are excited to have her.”

Michel Zerolo of Oceanic Bloodstock bidding on behalf of MV Magnier and White Birch Farm spends €550,000 on Lot 122, the Siyouni colt out of Sapa Inca (Galileo), the full-sister to Johannes Vermeer, winner of the Criterium International (G1), and Elizabeth Browing, winner of the Group 2 Kilboy Estate Stakes (G2).

“She has bred a beautiful colt again by the same stallion, it is magic mating – Siyouni and a Galileo mare.”

The colt was sold by Monceaux, and Henri Bozo of the farm gave the latest news on Sapa Inca: “She has bred a beautiful colt again by the same stallion, it is magic mating – Siyouni and a Galileo mare. This is a lovely colt, I am very happy.

“Today has not been an easy day, we have sold nearly everything but so far it has been a bit of ‘first day syndrome’.”

Zerolo spent €3,000,000 on Rougir for the same partnership at the Arqana December Mares Sale, and she runs in tonight’s Beverley D Stakes (G1) for trainer Chad Brown.

Of course, the White Birch Farm-owned Ac winner Sottsass was bred by Monceaux, is by Siyouni and is out of the Galileo mare Starlet’s Sister.

THE Eve Johnson-Houghton-trained Jumby, a son of New Bay, collected his first Group race success when taking the Hungerford Stakes (G2) at Newbury.

Bred by Ballylinch Stud, he was purchased by Johnson-Houghton and Highflyer Bloodstock at the Tattersalls October Book 2 Sale 2019 for 45,000gns.

“Jumby has won it like a proper horse. I’ve always thought he had the pace for six furlongs, but not the gate speed. He’s growing up and is a big horse”

His dam Sound Of Guns (Acclamation) was a Group-placed juvenile over 6f and from family of Irish 2,000 Guineas winner Shaadi. She has a Waldgeist filly due to sell in Book 2 (Lot 895).

Johnson Houghton said after the race: “Jumby has won it like a proper horse. I’ve always thought he had the pace for six furlongs, but not the gate speed. He’s growing up and is a big horse. His form’s there to be seen and he could even go a mile, but he loves fast ground and running at horses after a good pace.

“I’ll enter in the Prix de la Foret, but we need to see what the ground is like and he’s in the City of York next week, and I’m not ruling it out yet. We could then think about Dubai and Bahrain.” 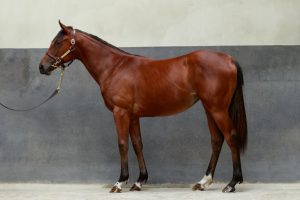 THE SIYOUNI half-sister to Native Trail (Oasis Dream) is bought by Al Shira’aa Racing for €550,000. The farm’s general manager Kieran Lalor in charge of bidding (Lot 62).

She was sold by breeder Haras d’Haspel

Native Trail, winner of the Group 1 Irish 2,000 Guineas, the National Stakes and Dewhurst Stakes, is currently a 6/1 chance for the Juddmonte International.

Luxembourg back to winning ways… just!

Luxembourg wins - but only just!

One-time Derby favourite Luxembourg was made to work mighty hard by Insinuendo in the @Fitzdares Royal Whip Stakes @curraghrace. pic.twitter.com/u0N8J2JEaU

THE juvenile Listed races in Britain and Ireland today were won by progeny of the Darley stallion father and son team of Dubawi and son Night Of Thunder – the Denford Stakes (L) was won by Victory Dance (Dubawi), while Mauiewowie, a daughter of Night Of Thunder, took the Listed Curragh Stakes.

Victory Dance, trained by Charlie Appleby, is out of the Street Cry mare Dane Street, bred by Airlie Stud and Sonia Rogers. The colt was bought by Godolphin at the Tattersalls December Foal Sale for 700,000gns.

Dane Street is already dam of a top class performer – her 2016 filly by Scat Daddy is Skitter Scatter, winner of the Moyglare Stud Stakes (G1) in 2018. Her 2015 foal named Data Dependant (More Than Ready) was a Grade 3 runner-up as a juvenile.

Dane Street had a 2021 filly by Kingman, a 2022 colt by the same sire and was covered this spring by Palace Pier

Mauiewowie was bred by Trebles Holford Farm Thoroughbreds out of the Holy Roman Emperor mare La Chapelle, and is the mare’s first black-type performer.

La Chapelle is closely related to the US Grade 1 winner Zhukova (Fastnet Rock) and is a half-sister to the multiple Group 1 winner and Darley sire Ghaiyyath (Dubawi).

La Chapelle had a filly by Expert Eye in 2021, was due to Postponed this spring and was covered by Lope Y Fernandez .